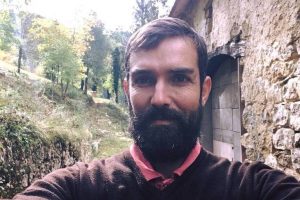 Pedro Prazeres’ work binds dance and landscape on a symbiotic relation of crossed knowledge. By turn landscape architect and choreographer, his works belong to the intersection of both creative processes and he weaves his artistic practice in the relationship between the place, the subject, and the ethereal. For him, landscape and dance come in resonance through a sensory, proprioceptive and intuitive approach.
Pedro is now based at the Cévennes and Porto. After a degree in Landscape Architecture in Lisbon and Helsinki, dance degree in Dundee and Prague (where he was awarded INOV-Art grant for artistic crossings), we worked as a dancer and landscape architect in Prague and Berlin.  Lately, after having finished the MA program ex.e.r.ce at the National Choreographic Centre of Montpellier deepening his research on Landscape, Dance and other stories, he continues his artistic work towards the notions of in-betweenness, nonplace, and free will.  How humans condition the environment of how this environment conditions human decisions is a major question on Pedro’s work.
Besides his landscape architecture teaching and consulting work, Pedro creates dance installations and performances he has presented in international festivals, such as DDD festival (Dias da Dança) at Porto, FIDCU at Montevideo, museums, like Serralves Foundation, Prague National Gallery, theatres, non-conventional venues, and urban and rural landscapes. He works as interpreter and collaborator and has worked with Antonjia Livingstone, Martha Moore, Fabrice Ramalingom, Mette Ingvartsen, Christine Quoiraud, among others.
Pedro also works as a dance dramaturge and shares his practice through workshops for professional dancers, dance schools, the general public, and social, pedagogical and psychological institutions.
+info 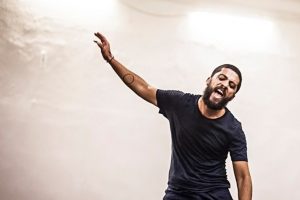 Renan Martins started his education in Rio de Janeiro at Deborah Colker Movement Center at the age of 16, and one year later won a full scholarship to study at SEAD in Salzburg, Austria. In 2010 he joined P.A.R.T.S. (Performing Arts Research and Training Studios) to be part of the Research Cycle where he focused more intensively on choreography and started developing his own work. He has performed his pieces in different venues in Brazil, Austria, Slovenia, Germany, Holland, Portugal, Russia, Belgium, Croatia, France, Czech Republic, Slovakia, and Switzerland. Along with his choreographic practice he has also been a performer for Iztok Kovac, Marysia Stoklosa, Pierre Droulers, Anne Teresa de Keersmaeker, Ceren Oran and Alexandra Waierstall. Since 2013 he is a member of Damaged Goods/Meg Stuart performing in “VIOLET”, “ATELIER III” and “Projecting Space”. He has been an active teacher in the last couple of years giving workshops and master classes at Signsix, DansCentrumJette, P.A.R.T.S. Summer School and Cie. Thor in Brussels, SIBA in Salzburg, Theatre de La Bastille in Paris, Codarts in Rotterdam, Munich’s University of Drama, Studio ALTA in Prague, DOCH in Stockholm, Zagreb University and Artesis/Conservatory of Antwerp where he has also been a jury member of the committee. In 2014 and 2015 Renan joined the team of SeventySeven vzw together with other artists such as Les Slovaks, Anton Lachky, Moya Michael, Meytal Blanaru and Peter Jasko, where his work was represented. With his first group piece “Let Me Die In My Footsteps” he was nominated by Aerowaves one of the top 20 choreographers of the year 2016. His other works “REPLAY” and “GLORY” are also currently on tour. As of October 2017, he joined Hiatus Company/Daniel Linehan (BE/US) as a dancer for the production “Third space”. His new work “SATURNO, A FESTA!” in collaboration with Colline Etienne (BE) and Zen Jefferson (UK/DE/CH) premieres in October 2018 at Studio ALTA, Prague.
+info

Born In Italy, Francesca Perrucci is a dancer, choreographer and performer graduated in SEAD (Salzburg Experimental Academy of Dance ) Austria. As choreographer in 2015 she created “Looking for the face I had before the world was made” and  “Unsettling Green” and in 2016 “Persona” in collaboration with Gustavo Monteiro. Those performances were shown in Festival and Venues such as Teatro Municipal do Porto – Rivoli . Campo Alegre, Festival Internacional de Danza Contemporánea da Ciudad de México, PRISMA – Festival Internacional de Danza Contemporánea de Panamá 2018, 25a Quinzena de Dança de Almada – International Dance Festival, Entrelaçados – Contemporary Dance Festival, RollOut Dance Film Festival, Dance Bridges Festival, Movimiento en Movimiento – 6o Festival Internacional de Danza para la Patalla, the performance bar, It’s Liquid Art Show, etc. At the moment Francesca is working in the last production of  Né Barros “Revoluções” and in Düsseldorf with “Theater der Klängae”. She is leading classes and Laboratories in Formation of “Performing Art” in the city of Porto. Francesca Perrucci is a co-founder of “Sekoia – Artes Performativas” 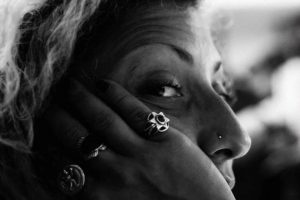 (Porto, 1982) curator, choreographer, performer, producer, playwright, and writer. She studied History of Art, Contemporary Art and Visual Arts in different Portuguese institutions. She has been practicing choreography and movement since 2005. She has collaborated in the production of several festivals (Festival of the Factory, Alkantara Festival and Serralves in Festa). Member of Soopa OOPSA, Arco da Velha, Cão Danado & Co. Co-directed and founded MEZZANINE (2009-2017). As a creator, she presented “Open Season” (Porto and Berlin), “Fraud by Nature” (Berlin) and “Stabat Mater Furiosa” (Porto). It was DanceWeb – Impulstanz’12. Concluded Deborah Hay SPCP, “Dynamic” in 2012. Member Transfabrik – 2013, transdisciplinary project on writing and criticism in the performing arts. She trained at Balleteatro, Tanzfabrik, ENSBA Lyon and FBAUPorto. Ana does cultural mediation and national and international programming (SAMANHO M Mira Artes Performativas, Ateneu Comercial do Porto, Culture in Expansion CMPorto, To School Out of School Colectivos PLÁKA, TanzCongress Dresden 2019, TRANSLOCA, and other contexts). Between national and international creators, she has been collaborating regularly with Meg Stuart since 2011.

Carolina Martins holds a degree in Art Studies and a post-graduate degree in Literary and Cultural Studies (University of Coimbra). She currently holds a doctoral scholarship from FCT and is currently a doctoral student in the FCT Ph.D. Programme in Advanced Studies in Materialities of Literature at the School of Arts and Humanities at the University of Coimbra. She is currently writing a thesis on the perspectives of spatiality in graphic narrative installations, which focus on the potential of architectonic spaces as narration agents through an interactional dynamics with other spaces (paper, screen) that contributes for the development and unfolding of the narrative itself. She has developed some experimental work in the digital field and her works were shown in some international art festivals, such as PLUNC 2015 (Lisbon, Portugal),  FILE 2017 (São Paulo, Brasil), ELO 2017 (Porto, Portugal) and FOLIO 2017 (Óbidos, Portugal). During this period, she curated some mail art and digital literature exhibitions. At the moment, she’s developing practical work in the context of her own academic research.
+info

DOMENICO GAROFALO
Domenico Garofalo, born in 1987, is a manager and promoter in the field of contemporary dance, from Naples (IT). Graduated in political science and in public and corporate communication, during his studies he has different experiences in the field of production and organization of festivals. He works with several Italian artists and companies as managers and promoter, including the choreographer Luna Cenere, the contemporary dance company gruppo nanou and the choreographer Masako Matsushita, within the ULTRA project. Selected among the 5 best young Italian operators, he is part of the Crossing the Sea, project supported by the Italian Ministry of Fine Arts and Culture (MIBAC) together with some of the most important Italian festivals and a network of international partners. The works he promotes have been presented in the most important theaters, in Italy, and in Europe. He lives on a plane, between Brussels, Naples, and Porto.